In short: a raft is a printable, flat thick layer to even out your build platform. Through testing and whatnot your build platform takes a couple for the team and in time becoms uneven (holes, scars). The raft is there to make sure the build surface is flat, and also tries to assure good first layer adhesion to the platform.

My first rafts were thin candy string like threads that offered virtualy no support and actualy did the opposite of what it was supposed to do. The fatter base layers and the thinner support layer didn't assure first layer adhesion, except on very small builds. 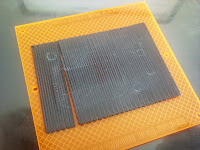 First off, i've learned through trial and error and many comments on the google makerbot operators group that the interface layer (thinner threaded 2nd raft layer) isn't necesary by default. If you learn how to make a nice fat spread base layer that's all you really need.

To get the raft you see here on the right, you need to manualy reposition the z-axis on the first line that's going down when the raft starts printing. Position your nozzle about 1mm above the build platform and start your print, then just lower the nozzle by hand untill your raft lines touch each other, but make sure they don't overlap. If the lines overlap you will see a very thin (like a hair) thread on top of the raft lines. That could mess up your first layer, but could also strip out your filament. By making such fat lines you could end up blocking the extrusion by feeding more into then the nozzle can lay down. So make sure the lines don't overlap. It'll take a couple of tries, so start out with a small raft to get the hang of it. 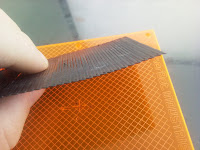 Your raft does need to have a thicker layer height, because if the layer height isn't thick enough the thin 'sheet' of plastic that will be your filament has no warping resistance.  My settings for this type of raft are :

The two important parameters to toy with are the Base Infill Density and Base Layer Thickness over Layer Thickness. These two directly control how close the raft lines are together and how 'fat' they are. 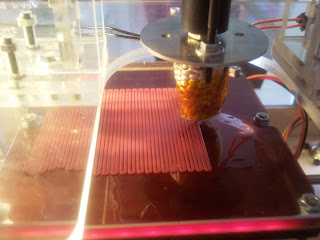 On my Heated build platform i'm still using a raft, because i haven't had a chance to sit down and work out the speed settings for the first layer. Also the many reported problems with first layer adhesion on a heated build platform make me not want to rush into it as it's probably going to be a pain in the ass to get it done. I have to cut off the raft each time now (or leave it on for extra object strength), but with the razor that comes with the kit it's cake.

Whichever settings you choose, know that a good raft is the first step to a good build. With a room temperature of 25-28° (high summer) and a good raft you'll be able to print big objects like the Printruder or large Mendel parts without a heated build platform. But be carefull when you print large parts and have a draft passing through your cupcake. Temp flux makes objects curl up. You could use two pieces of glass or see through plastic to cover up the front and back of the bot to make some sort of heated chamber. Even better would be to put your bot inside a wooden box with a glass door. That way you would be simulating the industrial 3D printers who work with heated chambers instead of heated build platforms. The final result would be the same.